Laolao Bay Watershed is unique part of CNMI’s ecology, economy and culture. Located on the east side of Saipan, the bay hosts diverse coral that is sheltered year-round from wind and waves. As a result, it is one of the most utilized sites on Saipan for fishing, snorkeling, diving, and other forms of recreation and tourism. Each month, at least 4,000 people visit the bay (MVA), and the coral has been valued at over 10 million dollars per square kilometer. Considering the impressive economic, ecological, and cultural value of Laolao Bay, protecting the ecosystem from ridge to reef is a priority of the Coral Reef Initiative.

In addition to the social and economic importance of the bay, Laolao also has strong historical and cultural importance. The watershed is not only the earliest site of civilization in the Northern Mariana Islands. Excavations at Laolao recently uncovered evidence of the oldest known habitation in the entire Remote Oceania, radiocarbon dated at 1687-1531 BC (Carson and Hung, 2017). People have been living in the Laolao watershed for over 3,500 years! Archeological studies throughout the watershed have found several large village sites with petroglyphs and rock art, stone and shell artifacts, ceramic shards, and latte stones.

Studies document a decline in the health of coral reefs and associated habitats (Houk 2011). This decline can be attributed largely to land-based sources of pollution, especially sedimentation.  In the mid 1990’s, illegal land clearing and fires in upper badlands led to significant erosion and sedimentation of Laolao Bay. Despite extensive work to reduce land-based sources of pollution, the most common threats to the bay continue to stem from:

As a priority watershed, Laolao Bay has been the focus of extensive efforts to protect and preserve natural resources. A Conservation Action Plan (CAP) was completed in 2009 and updated in 2012. It acts as a guiding document to improve, protect, and enhance the many natural, cultural, social and economic resources within the watershed. The CAP serves to organize cooperative efforts between regional, federal, and local partners. It was used to leverage funding to design and support projects, including almost $3 million from the American Restoration and Recovery Act (ARRA) and EPA.

Monitoring and Evaluating the Health of Laolao Bay

Water quality and coral reef health are regularly monitored in Laolao Bay. Data are used to track water quality, coral health, and to evaluate the effectiveness of restoration efforts. EPA/BECQ recently featured a success story about improvements in water quality in Laolao Bay, which can be found here.

Since the ARRA funded restoration projects in the upper watershed, monitoring shows a reduction in sedimentation (as measured by turbidity). Improvements are seen at all six reef flat sites and at both beach sites. 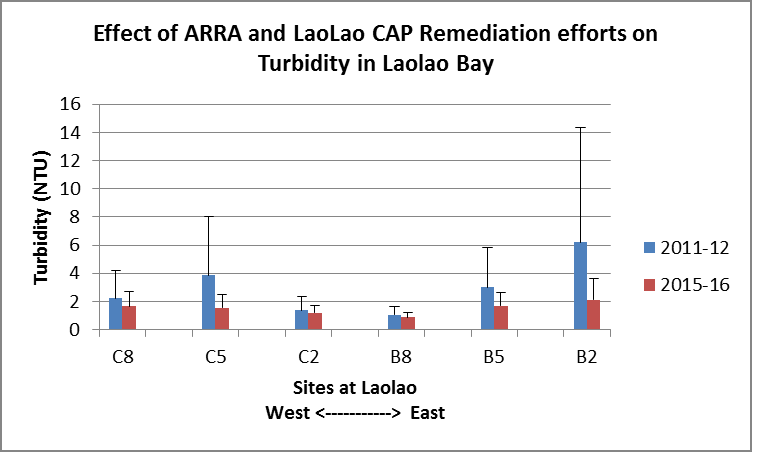 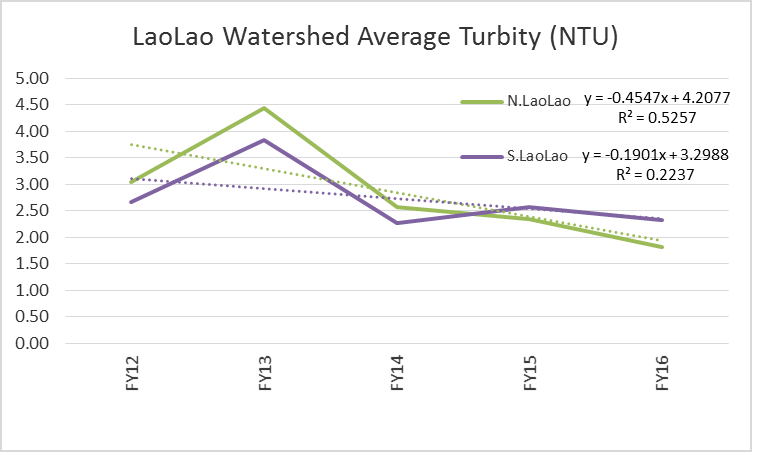 Know your watershed! Click on a watershed below to learn more details about that watershed, including a “Report Card” of land-based sources of pollution.

Or, click here to explore the latest watershed data available in ArcGIS.